With calving season still ongoing, it may seem like jumping the gun to start talking about breeding heifers.  However, if you want to improve your outcome when it comes to heifer pregnancy rates or heifers bred in the first cycle, now is the time to start considering your options.  After all, the definition of insanity is doing the same thing over and over and expecting different results.

The one thing that has struck me when we talk about breeding replacements is how often we breed and have significant nutritional change the same day.  Often we still get acceptable results when we do this, but what could our results be with some small modifications to our program?  Having a major nutritional change occur at the same time that we are expecting a heifer to become pregnant is not an ideal situation.

Consider this; if you are feeding the heifers with a feed wagon prior to breeding and turnout and the heifers are consuming 29 lbs of a ration that is 65% dry matter, she is consuming 19 lbs of dry matter every day.  If you turn the heifers out to grass, she would have to consume 76 lbs of grass to get the same amount of dry matter (this assumes early season grass at 25% dry  matter).  That is a huge nutritional change and one that cattle don’t make overnight.  If we are going to change feedlot cattle from one diet to another, we allow them 3-5 days.  When we change the diet of replacement heifer, we open the gate.  In doing this, the heifers basically go into what is called negative energy balance and are using energy reserves and burning calories to maintain themselves.

Research at SDSU has investigated this effect of breeding at turnout time and have found heifers fed in drylot and then turned out after artificial insemination can lose up to 3.4 lbs/d for the first week out to grass.  This has a negative impact on embryo quality and development.  When SDSU evaluated embryos from heifers that were either kept on their same ration after breeding (allowing them to continue gaining about 1.5 lbs/d) or restricted after breeding, the results showed significant decreases in embryo quality and less developed embryos (see table).

Another factor to consider in this scenario is the behavioral change in heifers going from a confined area to grazing.  Heifers need to readjust to grazing.  In work done at SDSU, heifers moved from a drylot to grazing lost 3.4 lbs/d over the first week on grass.  Another study showed that heifers in a drylot generally took between 2000-3000 steps per day in the drylot prior to breeding while heifers that were grazing prior to breeding were averaging closer to 7000 steps per day.  When the drylot heifers were turned out to grass after artificial insemination, their activity level showed they took nearly 18,000 steps per day- a 6x increase compared to what they were used to taking.  This is likely a big contributing factor to the gain lost in the first week. 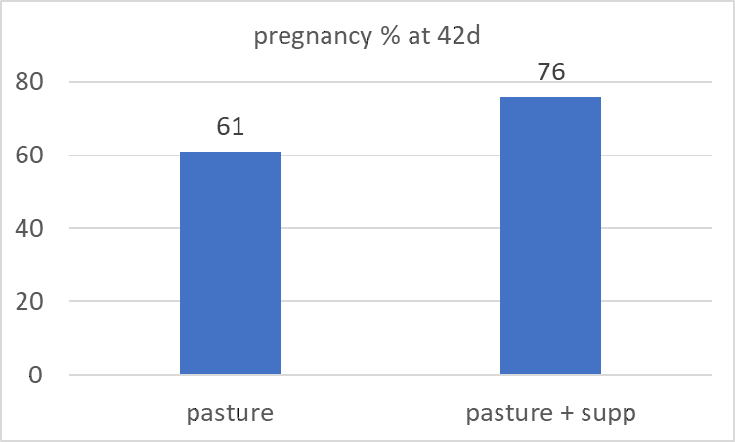 Another factor that is a common question is when should you move or haul heifers after insemination.  The best options are either to haul immediately (d1-4 post AI) or wait until 42 days or longer.  Transporting heifers between days 8-33 post-AI showed a 9-12% loss of pregnancies.

Change is difficult, but not impossible.  When you evaluate your scenario, maybe there are ways that you can minimize the nutritional change for these heifers at breeding or turnout.  A couple of ideas for you to consider might include turning the heifers out early prior to breeding so they are through the nutritional change and adapted to grazing by the time breeding season occurs.  This might not always be possible or the pasture you use for heifers doesn’t have a corral, and that might mean changing up pastures.  Another option might include trying to incorporate some partial grazing prior to breeding while still delivering a partial ration.

Another option would be to try to incorporate supplementation at turnout time.  More research from SDSU showed that heifers that received supplement upon moving to pasture had higher pregnancy rates than those moved to pasture without supplement after being developed and bred in the drylot (see chart).  The Accuration block is a very good fit for this particular scenario.  They allow relatively high intakes when required to help boost energy intake but have intake limiters included to keep heifers from over-consuming.  As the forage begins to mature and the heifers adapt to grazing, intake will decrease.  This supplementation allows you to have free-choice supplement out to help keep the heifers from going into as severe of a negative energy balance as if they had no supplement.  It has the potential to really be a nice short-term investment with a big upside.

How you set up your breeding program for your heifers makes a difference.  Change is never an easy thing to do but the payoff can definitely be worth your time to look into doing things slightly different.   Considering the impact that getting the heifers bred to calve in the first 21 days has on long-term profitability, now is the time to consider your options on how to do a better job at turnout.

What do you need to be thinking about this time of year?

**If you would like to receive this via email, please send an e-mail to roxanne@dakotalandfeeds.com.